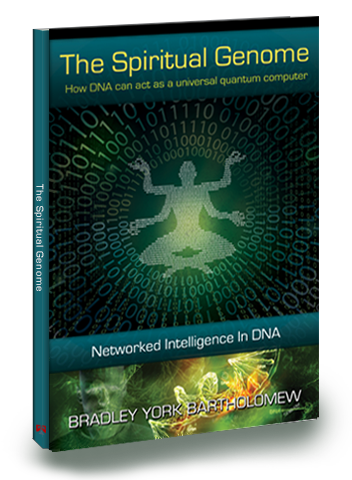 Bradley York Bartholomew’s book The Spiritual Genome brings to the forefront the theory of a networked intelligence in the DNA. He clearly outlines this theory that the DNA of all living creatures (including plants) is connected in the quantum substratum, and that it is this networked intelligence which constitutes the essential oneness from which springs all the diversity of life that we see around us. Bradley Bartholomew’s book illustrates that this networked intelligence is governed by a level of computer processing declared as the ultimate source of life. This he says is demonstrated in how memristors in the DNA enable the storing of data, which has a direct bearing on such widely held beliefs about past lives and reincarnation. The Author cohesively explains how the DNA can act as a universal quantum computer with sufficient processing power to potentially enable the generation of the entire universe.

The Spiritual Genome explores how DNA acting as a universal quantum computer is foreshadowed in the Hindu Upansishads written more than 2500 years ago. The Upanishads are interpreted using state of the art neuroscience as well as Quantum Mechanics. This is said to not only enable the precise location of the Inner Self, but also demonstrates that what we experience through our five senses is capable of being generated from within. It can also be generated through a Quantum Mechanical interpretation of Maya; the ancient Hindu doctrine of the illusory nature of all things. In the words of Brad Bartholomew the Author, “We find that all this “diversity” that we see around us is in fact a virtual reality nested in the networked intelligence”.

THE KNOWLEDGE OF GOOD AND EVIL

This book presents a new interpretation of psychoanalysis that the trauma of birth is the cause of our sadomasochistic tendencies as well as our non-erotic aggressive tendencies and that these evil aspects of our psyche only arise after birth. The philosophies of Colin Wilson, Adam Smith, Sigmund Freud and Arthur Schopenhauer are presented in support of this argument. An overview of cosmic justice in ancient Greece is also presented, as well as the Varieties of Religious Experience of Willam James and the theology of Leo Tolstoy.

Takes a satirical look at the war in Iraq instigated by George W. Bush and Tony Blair. Also asks the question whether Queen Elizabeth II of Great Britain supported this war. Investigates the Judeo-Christian roots of the Military-Industrial Complex and demonstrates that the war in Iraq should historically be considered the Eighth Crusade. Presents Oliver Stone’s alternative historical look at members of Bush administration. Presents the argument of Carlotta Gall that they should have attacked Pakistan not Afghanistan. Also presents the ‘smoking guns’ of 9/11, namely the crash of AA 77 into the Pentagon, the crash of UA 93 near Shanksville, PA and the collapse of WTC Building 7

It is generally felt that a nation must have an evergrowing population in order to maintain economic prosperity. Declining population will inevitably lead to recession. This book demonstrates how a nation that adopts affirmative recycling policy can maintain or even enhance its general level of prosperity even though its population numbers are either static or in decline.

Wherein the author edits and collates the ramblings of one his friends who is a true desperado.