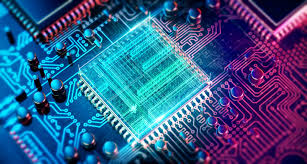 <Well I had a eureka moment last night just like Archimedes (and this by the way is why AI will never surpass human intelligence; they can’t sleep and dream; machines have no unconscious mind) I had a dream about these strange triangle shapes that were differentiating each other up to 10 times. Woke up and couldn’t make head nor tail of it. Got to thinking about it and realized they were <BRA KET> Dirac formalism and they were performing QM matrix calculations on themselves. I realized that a quantum computer performs complex QM linear algebra and matrix math to solve Schrodinger’s multi-particle time dependent wave equation at the speed of light. We gotta do away with all thought of binary numbers. Think solitons with geometric phase that represent Heisenberg Dirac Pauli matrices that are manipulated by holonomic quantum gates that may or may not use Boolean algebra to do complex calculus – differentiation integrals Fourier transforms etc. But wait – there’s more. A quantum computer can also solve Einstein’s time dependent field equations using 4×4 matrices that represent space-time vectors and Christoffel symbols. Eventually quantum computers will be able to simulate the universe. So the bottom line is forget about all this binary qubit stuff. Think linear algebra and matrix math and in the short term start thinking how you could make a quantum computer that will perform all the basic operations of MATLAB at the speed of light.>

Post in Quantum Computing group on Facebook on 15th March, 2019
The problem with science is that the knowledge is so compartmentalized. You’ve got experts in photonics and QM who know nothing about optogenetics, and you’ve got experts in optogenetics who have no clue that they’re routinely dealing with QM subjects such as ‘wave-particle’ duality, quantum tunneling, and semiconductor nanotechnology. Here is the abstract for a paper in J. Integrative Neuroscience “In this paper we argue that, in addition to electrical and chemical signals propagating in the neurons of the brain, signal propagation takes place in the form of biophoton production. This statement is supported by recent experimental confirmation of photon guiding properties of a single neuron. We have investigated the interaction of mitochondrial biophotons with microtubules from a quantum mechanical point of view. Our theoretical analysis indicates that the interaction of biophotons and microtubules causes transitions / fluctuations of microtubules between coherent and incoherent states. A significant relationship between the fluctuation function of microtubules and alpha-EEG diagrams is elaborated on this paper. We argue that the role of biophotons in the brain merits special attention. “
You got people right now making nanoscale integrated circuits using the DNA molecule as the scaffold and mounting electrically conducting carbon nanotubes to make up the electronics and they think they are making a CPU for a conventional computer. What if they mounted tubulin instead and tried making the CPU for an optical quantum computer.
In the future there will be quantum computing schools turning out experts in photonics, QM, optogenetics and cellular communication in biological living systems. Then maybe we will see some advancement on a quantum computer as big as a SUV.
Emission of mitochondrial biophotons and their Effect on Electrical Activity of Membrane via Microtubules
Post in Quantum Computing group on Facebook on 16th March, 2019
This link by Francesco Rizzo is astounding. The future of computing will be using matrices to solve complex differential equations like Schrodinger’s equation in just one step! Can you imagine if this is being done at the speed of light in a quantum computer. Here is the full abstract: “Conventional digital computers can execute advanced operations by a sequence of elementary Boolean functions of 2 or more bits. As a result, complicated tasks such as solving a linear system or solving a differential equation require a large number of computing steps and an extensive use of memory units to store individual bits. To accelerate the execution of such advanced tasks, in-memory computing with resistive memories provides a promising avenue, thanks to analog data storage and physical computation in the memory. Here, we show that a cross-point array of resistive memory devices can directly solve a system of linear equations, or find the matrix eigenvectors. These operations are completed in just one single step, thanks to the physical computing with Ohm’s and Kirchhoff’s laws, and thanks to the negative feedback connection in the cross-point circuit. Algebraic problems are demonstrated in hardware and applied to classical computing tasks, such as ranking webpages and solving the Schrödinger equation in one step.”
Solving matrix equations in one step with cross-point resistive arrays

This paper Solving matrix equations in one step with cross-point resistive arrays involves memristors which basically uses the memory in electric current. Years ago Roger Penrose found quantum effects in microtubules. I posted a few days ago a paper about biophotons and microtubules “Our theoretical analysis indicates that the interaction of biophotons and microtubules causes transitions/fluctuations of microtubules between coherent and incoherent states.” I have also come across theory that these microtubules act as optic fiber that enables light signals to pass to the various sections of the brain that gives the brain phenomenal parallel processing capacity. Electrical signals are too slow for signals to pass to widely separated parts of the brain for parallel processing. This paper about solving matrix equations in one step also involves parallel processing. What I would like to propose is that these ‘quantum effects’ that Penrose found and these “transitions/fluctuations of microtubules between coherent and incoherent states” actually are a form of memristor for light similar to the memristors in electric current. Here is relevant sentence from an abstract of paper <To facilitate cytoplasmic remodeling and timely responses to cell signaling events, microtubules depolymerize and repolymerize rapidly at their ends.>

In vitro and in vivo analysis of microtubule destablizing kinesins

Well I can’t help thinking that these ultrashort laser pulses are what I call solitons, and their ‘specially designed donut-shaped intensity profile’ has got something to do with their geometric phase!!! <As a rule of thumb, it can occur whenever there are at least two parameters characterizing a wave in the vicinity of some sort of singularity or hole in the topology; two parameters are required because either the set of nonsingular states will not be simply connected, or there will be nonzero holonomy.> A donut-shaped intensity profile = singularity or hole in the topology!?

“We used femtosecond laser pulses with a specially designed donut-shaped intensity profile. The direct impact of a low-intense pulse train on a thin halide perovskite film allows to imprint the disks with a diameter down to 2 microns. The imprinted disks have smooth facets while the femtosecond pulse processing ensures minimized thermal impact of the perovskite>

Read more at: Microlasers for photonic computing of future