THE DEMON IN THE MACHINE 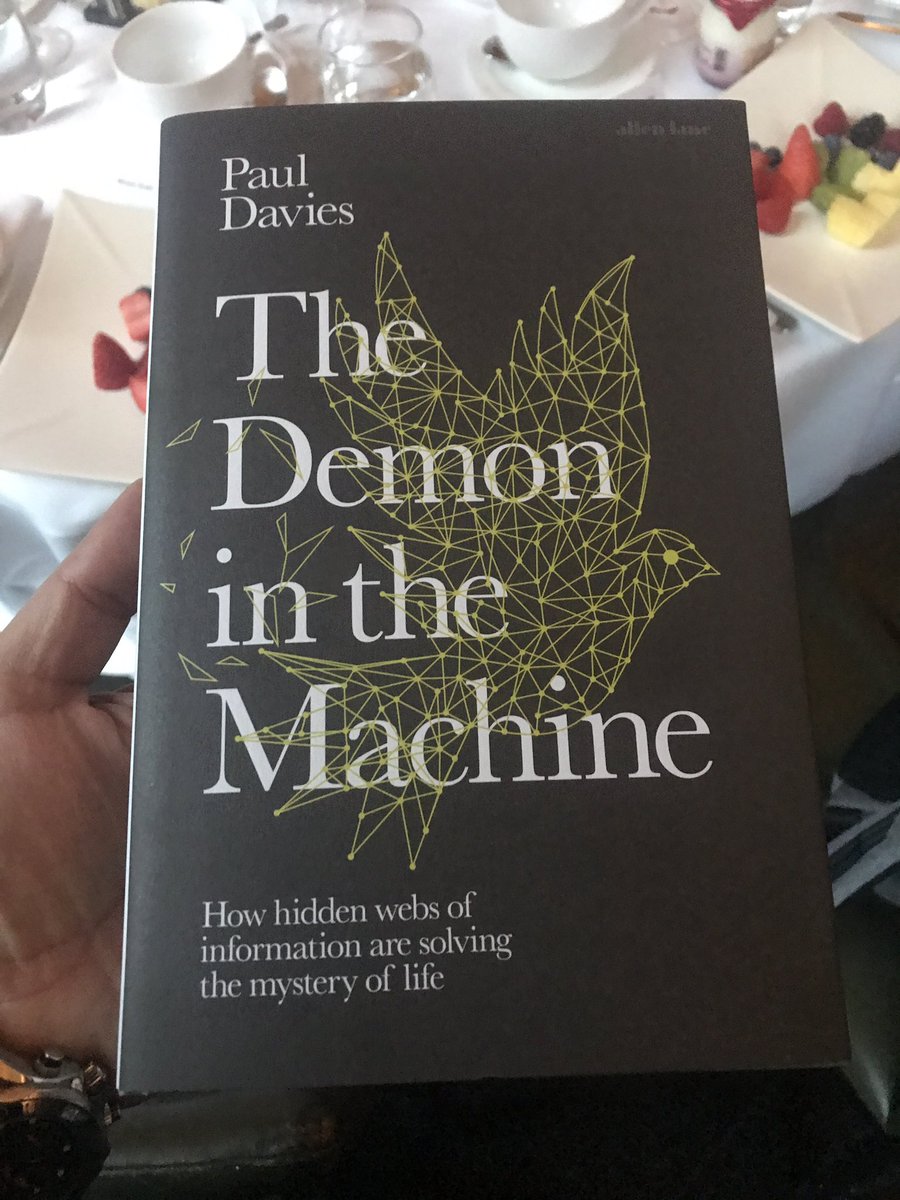 A review I wrote for Paul Davies’ new book The Demon in the Machine. This book has the potential to overturn Neo-Darwinism. But you have to know how to interpret the book. Essentially intelligence and consciousness is in the DNA in its own right as an organism. The DNA is ‘thoughtfully’ orchestrating its own evolution.

In his new book The Demon in the Machine, Paul Davies attempts to provide an answer to Schrödinger’s question “What is life?” posed in a series of famous lectures that he delivered in Dublin in 1943. An auspicious date because unbeknown to him across the Irish Sea in England Alan Turing had just made the first computer. In those lectures, Schrödinger as one of the founding fathers of quantum mechanics was obviously angling to somehow reconcile quantum mechanics with organic matter and he was not optimistic and actually thought that some ‘new physics’ would have to be developed that would explain life.

Paul Davies offers as an answer to Schrödinger’s question that energy can in some way be equated with or be responsible for information; that the energy in a system directly encapsulates the information in the system. However when he comes to giving precise details about how the energy in a biological system can in some way generate the information in the system he reverts to conventional biological energy that drives cellular processes, namely ATP. Nowhere in his book does Davies point out that Schrödinger’s own famous wave equation is precisely about the calculation of energy in a system. Schrödinger’s wave equation is a complex differential equation that will enable a physicist to calculate the energy in a system. The hydrogen molecule which consists of two hydrogen atoms bonded together is the largest system for which a solution can be found for Schrödinger’s equation, but the fact is that every molecule whether organic or inorganic, has this wave equation including the extremely complex aperiodic DNA molecule.

Davies describes in detail how ATP drives a certain cellular component. The ‘information’ he gives comes as a result of a biologist ‘observing’ this process using no-doubt a variety of sophisticated measuring instruments, and just a basic knowledge of the principles of quantum mechanics should alert him to the fact that this act of observation has resulted in a collapse of the wave function not only at the DNA level but at the cellular level. This perhaps is not the right terminology. It involves the collapse of a wave function that encompasses the genome, the cell, the measuring equipment and the observing biologist. If you are looking for ‘information’ to answer the question ‘What is life?’ you need go no further than this one act of observation. There is more information here than all the computers in the world working in parallel could compute.

While we are on the subject of computers processing ‘information’ I read Davies book carefully thru from beginning to end, and not once did I come across the word semiconductor. May I humbly suggest to him that Schrödinger’s famous question ‘What is life?’ can actually be answered in one word – carbon. Carbon, like silicon, has four electrons in its valence shell and is a classic semiconductor. In 1943 however Schrödinger did not know this. The new physics that Schrödinger was seeking to explain life is simply semiconducting technology which leads to electronics and nanotechnology and ultimately to information technology. The result is that Davies correctly answers Schrödinger’s question without actually explaining precisely how that could be so. Davies has resort to complex self-regulating ‘up-down’ neural networks that somehow produce all this coherent ‘information’ that we take to be the real world, whereas all that was required to convince us that biology is about information is to point out that the DNA is essentially a carbon nanowire.

Well perhaps not simply that, he would also have to explain how the DNA could act as a semiconducting nanowire. And herein lies the other conundrum. After having read his book thru carefully from start to finish, I did not come across the word ‘optogenetics’. The fact is that there are thousand of research papers in mainstream journals detailing how the DNA absorbs electromagnetic radiation, everywhere from UV light down to ELF radiowaves (aka brainwaves), and Davis as a physicist will surely know that when a semiconducting nanowire absorbs electromagnetic radiation it pushes the electrons out of the valence band and into the conduction band. He will also know that when these electrons fall back into their ‘holes’ in the valence band they emit electromagnetic radiation (usually in the UV to visible light range aka biophotons).

Effectively Davis has correctly answered Schrödinger’s question ‘What is life?’ without knowing how or why. We shall call it inspiration. Davies has always impressed me as more than just a popularizer of science, but as a philosopher, dare I say a prophet. I distinctly remember one of his earlier books that the universe is the ‘mind of God’, which impressed me then although he fell short of recognizing that the universe is indeed a virtual reality of mental construct, and that our reality is no more than a sustained and consistent dream.

I particularly commend Davies for his ‘radical’ attempt to question Neo-Darwinism. He quotes with approval what Nobel Prize winner Barbara McClintock says that the DNA seems to be ‘thoughtfully’ orchestrating its own evolution, which clearly implies that both ‘consciousness’ and ‘intelligence’ are in the DNA as an organism in its own right. Davies puts this forward that life is about ‘information’ and once we understand that the DNA is actually a semi-conducting carbon nanowire it’s easy to see how this could be so. Indeed Schrödinger himself puts forward the same proposition in a latter series of lectures, Mind and Matter, which took place at Trinity College, Cambridge in 1956. I’m surprised that Davies did not mention this, as Schrödinger also offers an early theory of mutation based on the fact that the DNA is a semiconducting nanowire in those lectures as well.

This does not appear to be the case with simple proteins where there is a one-on-one relationship between DNA sequence and amino acid sequence, but there is certainly here an area of enquiry to see how complex proteins that are synthesized from more than one gene compare in human and chimp. Indeed if epigenetic factors are at work then this is most likely where they would show up.

I can’t remember when was the last time I read a book that I couldn’t put down, but Paul Davies book The Demon in the Machine is such a book. New Scientist has described his theory as ‘radical’ and indeed it is. I detect in this book a complete paradigm shift. Paul Davies has sufficient stature in the scientific community that if he cared to write a sequel and develop his ‘inspiration’ further, and perhaps call it The Ghost in the Machine, he could find himself on the same pedestal that occupies Schrödinger himself.