THE BIG MAC AND KFC ENCODED IN DNA 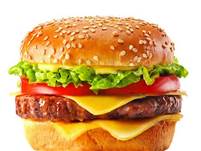 There is a new field of study called neurogastronomy and it is now known that when you sit down in your favorite fast food joint and savor the delicious aroma of your Big Mac and fries or your chicken McNuggets or your KFC hot and spicy what actually happens is that a certain gene is expressed in the odor receptors in your nose and it is precisely this genetic process which stimulates your taste buds and makes you want to wolf it all down. When the gene is expressed (and there is a specific gene for every conceivable taste and smell) it synthesizes a protein in one or some of the 350 odor receptors in your nose and it is this protein (and not the actual smell) which generates electrical signals that are transmitted to the olfactory cortex in your brain and causes the neurons to synapse that eventually allow you to become conscious of smelling this delicious food. There is an “odor barcode” in the DNA that literally tells you what that food you are eating smells and tastes like.

Our senses of smell and taste operate in conjunction. The taste buds in our mouth, principally on our tongue, produce the five basic tastes – sweet, sour, salty, bitter and umami. The taste receptors in the taste buds also operate by means of proteins synthesized from the DNA. We get the odor of the food through the nose of course and when we chew it the odor also wafts up through the back of the throat where it is classified by these odor receptors in the nose. Now that it is known that specific genes are expressed which enables us to classify the precise odor it is only a matter of time before it will be found that complementary genes are expressed which produces a protein in the taste receptors which activates the appropriate tastes. The taste buds just like odor receptors also operate by generating an electrical signal that then activates the neural network. That is going to require a specific protein synthesized from the DNA. Just being exposed to a chunk of meat or a bite of an apple is not going generate an electrical signal and activate the neurons. It all depends on input from the DNA.

You can read about this for yourself in an article in New Scientist (Feb 3, 2016) entitled “The Flavor Factory: Hijacking our senses to tailor taste”, and yes it does mean exactly what the title to the article suggests, the DNA is actually telling our senses what we are smelling and tasting and it is soon going to become possible by genetically modifying our odor barcode to give all those foods that we actually don’t like the taste of, things like carrots and cabbage and brussel sprouts, a whole new profile in our daily menu. Just think on it, your mom will actually serve you up spinach that tastes and smells like Burgerking’s Double Bacon Cheese Burger Deluxe or lentils that taste like cotton candy. And this is not just good for moms who have kids that only want to eat junk food. In the not too distant future there will be no more tuna and salmon in the sea for us to eat so future scientists will be able to change our barcode and we can sit down to a plate of boiled carp and think we are eating a delicious tuna salad or a plate of walking catfish and get all the pleasure from the best red salmon from Canada or Alaska. No matter how bad the ecology gets in the future the continued happiness of the human race is assured. We will still be able to get pleasure from food, even though we are eating vermin and invasive species and other stuff not fit for human consumption. It will no doubt have enormous utility for the space race as well. They will soon be able to reprogram the odor barcode in the DNA of astronauts so that tofu will smell and taste like chicken curry and beefjerky will taste like prime Texas T-bone cooked on a woodfired bar-b-que. This is really a stupendous scientific breakthrough!

Of course this news doesn’t come without a downside. This research is in its infancy and as yet the exact genes that are expressed in order for us to enjoy a Carl’s Jr Charbroiled Burger have not been identified. But once these genes are identified then the major junk food chains will spare no expense to see that they get their trademark on these genes. If in the future you are a mom struggling to get little Johnny to eat his greens and drink his milk and you decide to take him to a geneticist and have his odor barcode fixed so that his greens will smell and taste like KFC’s mashed potato and gravy and his milk will taste like Dr Pepper then you will no doubt have to pay a substantial royalty to these companies because they will be zealously protecting these tastes as their propriety right and will be proactive in retaining for themselves a piece of the action when the day comes when we no longer have to wait in long lines in the drive-thru to get the real thing, but rather go to our pantry and grab a chunk of bean curd that tastes better than Wendy’s Gouda Bacon Cheeseburger.

There is of course the philosophical problem that the scientists who are making these lifestyle-changing discoveries are not even considering. The fact is it is not known what the substance that carries the odor from the thing that stinks to the nose. There are many theories out there about how these smelly molecules travel to the nose from the source of the smell but in fact except for the case where there are actually airborne chemicals the odor carrying molecules have never been identified, nor is it known what can give them their smelliness. It is one of the great mysteries of science in fact. We have all been in that situation where we have smelt somebodies body odor twenty feet away when we are in the subway for instance. We immediately move right down to the other end of the carriage to get away from it. The smell is there. It is so strong you think you could cut it with a knife but in point of fact there is nothing there that is the carrier of the smell between the source of the smell and your sensitive nose. And the mystery is even more acute for the so-called lesser creatures. How does a horny dog know there is a bitch on heat three city blocks away and cause its owner no end of trouble to try to cut loose and get at that gal. Well at least this problem will be solved in the near future. It will no longer be necessary to have them castrated. Just a quick visit to the vet to have its odor barcode modified. A simple procedure of deactivating that particular gene in the dog’s nose that elicits the intoxicatingly erotic aroma. The poor critter will never be turned on again.

So not only do scientists have the problem of not knowing how the odor reaches the nose but now there is the added problem that they don’t know how the odor reaches the DNA in the odor receptors so that it can know which gene to express which will synthesize the appropriate protein that will generate the correct electrical signals which will enable us to identify and savor that odor. The fact is that the so-called odor receptors are there to tell the neurons in the olfactory cortex what is being smelt. But how does the DNA know in advance what the odor is so it can tell the odor receptors. This is a mystery that the neurologists investigating this phenomenon are not even bothering to ask. The only explanation can be that the DNA is actually modulating our sensory input. To put it bluntly the DNA is telling us what we are smelling and tasting. In my book The Spiritual Genome there is a chapter entitled The Five Senses where I demonstrate that all five senses, touch, sight and hearing as well as smell and taste, are capable of being activated from within. That is to say that it is our brain that is telling us what is outside there in the external world. The only conclusion that can be drawn from this is that the world is virtual and is actually generated by the DNA which acts as a universal quantum computer.