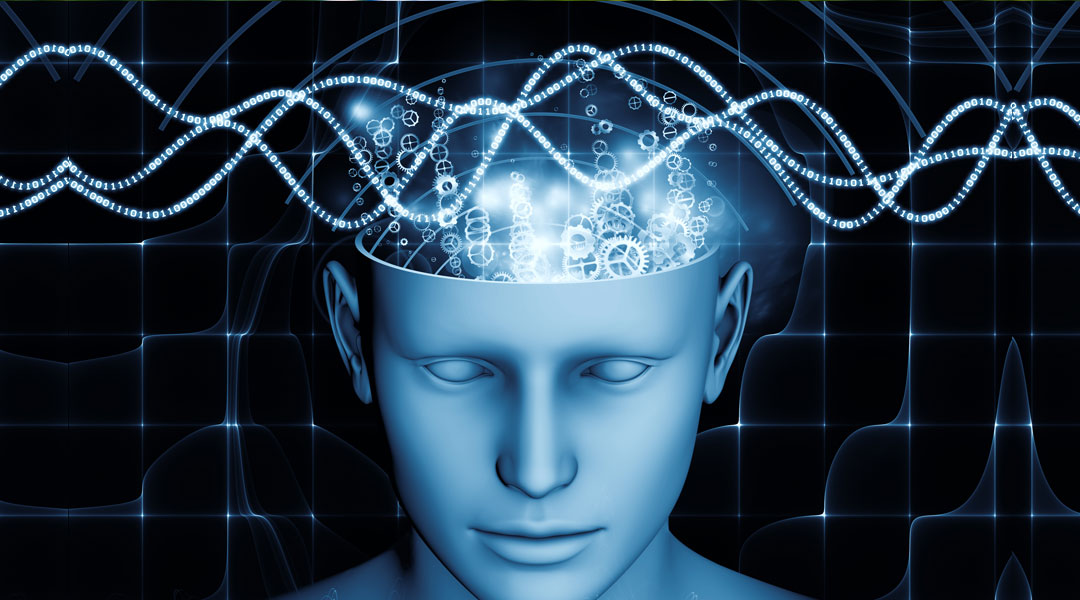 This is the title of an article in New Scientist magazine, 15 November 2014. It relates a landmark discovery by a team led by Dr. Martin Fussenegger, a bioengineer at ETH Zurich in Basel, Switzerland. I would like to state my opinion upfront that I consider this discovery to be the single most important advancement in scientific history. And yet the discovery has been reported in the most matter of fact way with no fanfare or media hype whatsoever. It is almost as if nobody cares, but what is more likely is that nobody can see its true significance.

So what did Dr. Fussenegger and his team actually do. He himself states, “We wanted to be able to use brainwaves to control genes. It’s the first time anyone has linked synthetic biology and the mind.” As we will see the way they managed to do this was through electromagnetic waves, biophotons, and so the true significance of what they have done is they have left behind the conventional chemical descriptions of gene activation, and they have turned instead to the almost unchartered frontier of the electromagnetic and the quantum mechanical properties of the genome.

I say ‘almost unchartered frontier’ because in fact I relate in Chapter 5 of my book on Biophotons that there is a burgeoning new area of study known as optogenetics. Neuroscientists have now discovered that they can literally, with the flick of a switch, turn the neurons on and off in our brain using light. So slowly but surely mainstream geneticists and neuroscientists are starting to realize that there is a great deal happening in our biological make-up that is brought about by electromagnetic phenomena, and their laborious descriptions about chemical reactions in the 3% of the DNA that is said to harbor our genes is really not advancing our understanding of anything important.

The Fussenegger team implanted some human kidney cells under the skin of a mouse. In these human cells they had also inserted a gene that was responsive to infrared light. When this gene is activated it causes a cascade of chemical reactions that will lead to the activation of another gene which we will call their target gene. This is the actual gene they wanted to switch on. Also in the mouse alongside the implanted cells they put an infrared LED that could be controlled wirelessly.

They then went about getting some characteristic brainwaves from some human volunteers. The volunteers were taught to produce a “relaxed” pattern of brainwaves from meditation techniques, and they played computer games to produce “deep concentration” brainwaves, and they were taught a technique known as “biofeedback” where they learnt to control their thoughts in such a way as to be able to switch on a set of lights on a computer. These human volunteers were wearing EEG devices that were linked wirelessly to the LED implanted in the mouse, and when that was switched on by any one of these three mental states, it activated the light-responsive gene which in turn started the gene cascade and led to the activation of their target gene, hence their claim that human brainwaves can control genes.

The implant in the mouse was encased in a semi-permeable membrane that allowed nutrients from the animal’s blood supply to reach the cells inside and also allowed proteins produced in the implant to pass into the bloodstream. When the target gene was activated it produced a human protein that passed into the rodent’s bloodstream. Dr. Fussenegger says: “We picked a protein that made an enzyme that was easy to identify in the mouse as proof of concept, but essentially we think we could switch on any target gene we liked.”

In the Chapter on Biophotons in my book, The Spiritual Genome, I relate how in the 1980s, a German biophysicist, Fritz-Albert Popp, discovered that our DNA absorbs and emits light. In that chapter I produce a great deal of evidence that the biophotons being emitted from the DNA are capable of carrying information and instructions for the regulation of our bodily organs, and the neurons in our brain. But it was not until I read this article in New Scientist that I began to appreciate the fact that the DNA also “absorbs” light. This is classic biofeedback. The DNA is absorbing biophotons as feedback from our bodily organs and the neurons of our brain. In other words, exactly as described by Dr. Fussenegger in his experiment, the DNA is constantly receiving updates from our body and brain, and this in turn will determine the output of future instructions by way of biophotons, as well as the activation of chemical genes modulating and regulating the synthesis of the all the proteins, hormones, neuropeptides, neurotransmitters, blood cells or whatever that go to make up the components of our biological landscape.

We are left with the inevitable conclusion that if we can change our thought patterns, then we can actually change the biofeedback that our DNA is receiving, and this can actually lead to chemical, and therefore physical, consequences.

Foreseeable medicinal uses for this discovery include enabling people with epilepsy to control their seizures, and it may allow invalids who are “locked in”, that is they still have mental alertness and consciousness but are physical vegetables, to self-administer pain relief and the like. The article in New Scientist speculates on where this discovery may be leading us. “In theory, the technology could be used for non-medical purposes, too. For example, we could give ourselves a hormone burst on demand, much like in the Culture – Iain M. Banks’s utopian society, where people are able secrete hormones and other chemicals to change their mood. The possibilities this could open up extend as far as your imagination. For example, the implant cells could produce hormones, so how about giving yourself a burst of oxytocin before a stressful social event – just by concentrating on a computer game?”

To my mind this discovery has an even deeper significance than what has been suggested in the article. For a start it proves without a shadow of a doubt that electromagnetic waves, biophotons, can routinely activate our genes as a regular biological process. This being the case, it strongly suggests that this is the means by which the genes receive biofeedback from our body as well as our brain. This in turn explains how Yogis in India can completely alter their bodily processes simply using the power of their own mind. They can for example, slow down their metabolism and cardiac system and live for several hours without oxygen, they can mentally condition themselves to walk on red-hot coals or lie on a bed of nails and feel no pain and receive no physical injury.

This discovery offers hope to anyone who has any physical or mental illness whatsoever caused by any genetic deficiency or imbalance. They can, simply by concentrating on their problem and perhaps the specific genes that are known to be the source of the problem, will themselves back into a state of wellness. In addition it has long been speculated that there is a longevity gene. So what if our descendants in the distant future become so adept at these techniques of controlling their genes with the power of their own mind that they eventually learn how to will themselves to live forever. As the article in New Scientist suggests, the possibilities that this discovery by Dr. Fussenegger and his team is limited only by the extent of our own imagination. And if it turns out that we have an imagination gene, then quite clearly the possibilities are unlimited, that is to say, infinite.